Over another fabulous breakfast at Maggie’s Superb Homestay, we looked forward to our final day of NAS workshops.

As we were working with older children today, who had a good command of the English language, we decided to focus on a short writing task, the aim being to empower these young minds to become leaders and vehicles for positive change in their own families, schools, communities, societies and the world. 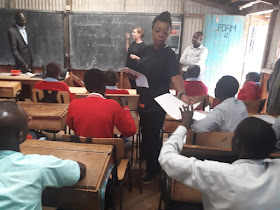 We began by asking them to list adjectives and characteristics they associated with good leadership, many students produced excellent and extensive lists in the strictly timed two-minute task. Following this activity, I prompted and probed the students to contribute to a discussion on why we needed leaders to have such qualities and characteristics.

I used such prompts as what is it that we expect from them? What are the important tasks they have and the roles we need them to fulfill?  Some of the responses included that they would like leaders to end tribalism, corruption, discrimination, child marriage, sex trafficking of young girls, gender inequality and improve rights to education.

Following this inspirational and considered discussion, each student was given time to write their list of adjectives and qualities, as well as a short passage about a problem or issue in society they felt passionate about, and, as a young empowered leader, would like to change.

Reading and grading these detailed and thoughtful responses, I recognized that there were indeed many strong, courageous young minds attending SUD Academy, who were well aware of, and felt passionate about global and social injustices.

I commended them on their excellent work and took some time to draw their attention to their own positive qualities and their power within before we parted for a lunch break.

Following this, Pennie got everyone out on the field and up and moving around playing some more of the excellent drama games she had delivered during the previous days and workshops. 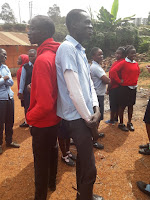 Pennie selected several of the written pieces and having prepared the students to deliver a short scene/drama performance well, by delivering her trust, mime, concentration, listening and voice projection exercises, each group acted out / mimed their allocated scenarios while the audience was faced with the task of observing and afterward narrating their interpretation of the social issue in each scene.

At the end of the day, we both reflected on the extraordinary accomplishments of the day and knew that we were both blessed to have had the opportunity to share our talents and expertise with this dynamic group of students.