Having arrived safely in Nairobi following our wonderful Kilifi experience, we awoke to a fabulous breakfast after some much-needed rest at Maggie’s Superb Homestay (Maggie Holidays).

We set off to shop for some food, snacks, and donations that we would bring with us to JEHO orphanage, where we would deliver our fourth NAS workshop for July 2019 Reach the Unreachable program.

On arrival at the orphanage, we were greeted warmly at the door by Pastor Miriam and were told that the children were expecting us and had been eagerly and excitedly awaiting our arrival.

This was clearly apparent as we entered the assembly room and received a rapturous welcome. 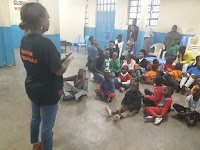 We began the workshop with the ‘adjectives name game’ which was a lovely way to become acquainted with the children and the nature of their character.

As this was going to be a shorter workshop, drama rather than language would be the main focus today, and so Pennie took the lead with a number of wonderful activities, thoroughly enjoyed by the children.

The overall aim of the afternoon was to build an understanding of the dynamics of the stage and we wanted the children to create a small production in small groups for performance. To prepare them for this, Pennie worked through a number of exercises to build trust, focus, and concentration.

These were made fun and competitive by pitting the children against each other in small groups to ensure their full participation and engagement. 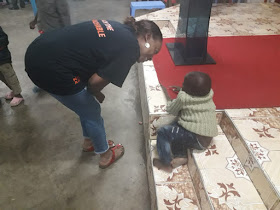 A seriousness and laughter exercise helped the children focus on the importance of being and staying in character despite distractions from the environment or others.

This moved into another activity which focused on reactions to different scenarios: walking in the road and being confronted by a snake, walking in the park when suddenly it begins to rain and finding a million dollars in the middle of a busy street were among some of the scenarios Pennie set for the children to practice believability in acting.

Next, a voice projection exercise required the children to concentrate on vowels and repeat these in voice levels from one to ten. Pennie and I demonstrated the power of using our voices by acting out a short scene in which Pennie was timid and responded inaudibly to my cues and questions.

Afterward, Pennie asked the group what their impression of that voice was before we did it again, this time she used her stage voice and the group noted the definite difference.

The children then enjoyed having a go themselves. The aim here was to help them understand the importance of having and using their voices…not only for acting or the stage but in real life. Breathing exercises further assisted with the clarity of voice and pronunciation. 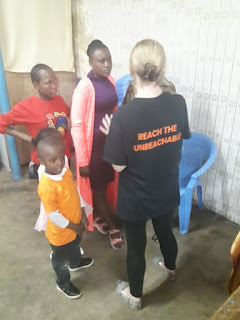 The large group was then divided into six teams. Pennie designated 5 leaders and had them pick children from the group to be on their team. Each team imagined a different scenario for a short performance in which they could put the activities of the day into practice.

After observing the performances and noting the learning the participants applied, we moved towards closing the day with a final activity during which I asked the children to think of role models and people they look up to and admire.

Eleanor Roosevelt, Miriam, and our very own NAS founder Naima Thompson were a few of the names that made the list and the group discussed the reasons for their choices.

Some of the children then requested that we record their personal messages of thanks, admiration, and gratitude for Naima and send them onto her with their best wishes. 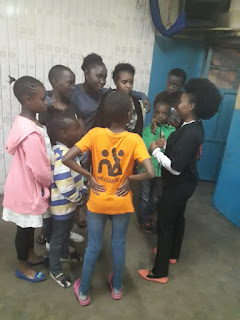 To close the workshop, the children gave feedback on everything they had learned today.

Some of their takeaways were trusting one another, having a voice, qualities of good leadership and the importance of gender equality.

The program proved to be an all-around success and as we shared out the snacks we had brought for the children and said our goodbyes, we felt privileged and full of gratitude as we reflected on another NAS goal accomplished with experiences that benefited all involved.