Tears of Pride and Joy on Day 3

Filled with excitement, yet also a little nervous; we woke early on the final day of our outreach project with the Kilifi children, who would perform the product of their work with us for their friends and families later in the afternoon.

We began the morning by letting the children know how extremely proud we were of them for how hard they had worked, how successful they had been and how much they had achieved over the passing days with us, and previous weeks with Furaha while learning the ‘Necessary Arts’ required to deliver ‘The Jungle Book’ play.

This brought us to a group discussion on leadership skills, the importance of believing in and having confidence in themselves and being strong to carry on in the face of adversity.

Reinforcing their success, we encouraged the children to recognise that they were already doing all of these things and already demonstrating all of these qualities in meeting, facing and overcoming the challenges set by NAS in language, acting, and drama, since the very beginning of their involvement with the NAS program – as much as four years ago for some of them.

The children spoke of their ambitions, dreams, and hopes for the future, and we reminded them that there is nothing they cannot do, and no reason they should feel held back in life.

They shared their thoughts of the occupations they hoped to fulfill in their adult lives, many of them aspiring to one day be doctors or nurses, a dentist, an accountant, an engineer. We had a couple of aspiring pilots and an air hostess, who wants to ‘see the whole world’ on our list too!

After a short break, during which the children discussed and reflected upon the morning affirmations, they were ready, confident, keen and eager to go over their lines for the last time and do the final rehearsal. Later, peeking from behind the curtain of our tailor-made stage, they were excited as they watched friends and family members arrive to see them deliver the product of all their hard work.

Before we knew it, 2pm had arrived and it was time for the show to begin. Directing from behind the scenes, Pennie and I looked on through eyes filled with tears and hearts bursting with pride as the children gave a wonderful performance, thoroughly enjoyed by the extremely appreciative audience, who clapped wholeheartedly following each individual scene, and overwhelmingly so at the end of the play. 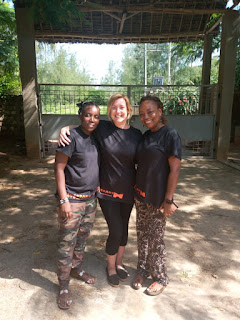 Feeling accomplished, joyful and full of pride, we all enjoyed a hearty and delicious lunch together. There was such a remarkable, positively charged atmosphere as Furuha, Pennie and I met and chatted with parents, siblings, and families who expressed the deepest gratitude to NAS for choosing to reach out to their Bofa children.

They complimented the work and expressed their hopes that it may always continue! They also shared some of the happy stories their children had told of their experiences with NAS in their homes. Many of them were so surprised to see their children ‘act’ as they did, and have such stage presence, as they were often perceived as very shy at home.

All too soon it was time for everyone to leave and after the heartfelt goodbyes and many many exchanges of gratitude, Pennie and I hit the road to the airport again.

Simultaneously exhausted and elated, we headed for Nairobi hopeful, to have the same successful outcome in the workshops at Jeho Orphanage and Sud Academy over the days to come.